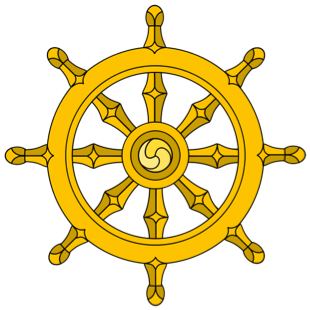 "Generosity in the Land of the Individualist" by Ajahn Amaro

To introduce us to the Paramita Practice theme of Generosity for the month of July, here is an adaptation of a talk given by a great English monk of the Thai Theravadan Forest Monk tradition, Ajahn Amaro.


Rugged Interdependency:  Generosity in the Land of the Individualist

The Buddhist festival known as the Kathina revolves around the simple act of offering a piece of cloth to a monk or a nun. But it's really much more than that. What this ceremony symbolizes is the profound relationship between the two halves of the Buddhist community: the Sangha and lay society. In the Kathina, there is a recognition of the physical dependency of the monastics on their lay supporters.
In the U.S., the idea of consciously becoming dependent on others is anathema to us. This is the land of the rugged individualist, where we "don't need nothin' from nobody." We get out there and do it on our own. Plow the land. Build a house. Make our own world. The way people relate to those living on welfare, hand-outs, or begging illustrates society's view that dependence is a lower form of life. You have failed if you are on welfare. You are in a degraded state if you need help. Most people would probably agree that this is the national mindset.

So what on earth is this business of choosing to live on hand-outs for the rest of your life? The set up in the Buddhist tradition runs counter to the self-sufficient, rugged-individualistic mindset. People often say to us: "You mean you don't grow anything? You just live on what people give you?" They become puzzled or upset. These things need to be explained.

However it might be misconstrued by others, the Buddha himself was very clear about the value of monastics being physically dependent on the greater lay community. For one, religious figures often get put into a high position in society. They become invested with a lot of power and authority by people around them. Begging is a brilliant way of limiting that area of power and control. While you may be an extremely high and revered spiritual teacher, at the beginning of the day, your bowl is still empty. You have no money to buy what you want or to go where you like. There may be a lot of power and authority in some areas of your life, but there is zero in others. Physical dependence is a skillful way to keep the power given to religious figures under control and in balance.

We can also reflect on the four requisites as laid out by the Buddha: food, lodging, robes, and medicine. These are the basic supports for life. Because of our dependency, we reflect on the physical needs that we have and we learn to use frugally what we have been given. We reflect on being easy to support. Of course, these are not highly refined metaphysical reflections; they are much more basic. The monk is hungry; give him food. This one's cold; wrap some cloth around him. The relationship between the monastics and the lay community is built on that physical dependency. We are not able to ask for anything and therefore must rely entirely upon the quality of our lives. If our lives are useful and have meaning to the greater community, then the bits of cloth will show up. The food will arrive. And if our lives are not worthy, then it won't show up.

The Buddha was a genius in establishing this kind of contact. Simply to survive, the monastics must consciously and on a daily basis interact with the greater society. We can't depend upon ourselves. We can't live independently from you. We can't shut the door and say that you laypeople are not welcome to visit us "serious meditators." Our bodies are fueled by the food you offer us. In fact, scientists say that all the cells of the body are replaced every seven years, so any of us who has been ordained for that long now has a body that is completely donated.

Looking at our lives of dependency in this way, we start to relate to things in a different fashion. If it were not for the accumulated kindnesses, efforts, and good will of countless hundreds and thousands of people, this body would not be able to sustain itself. Kindness is the actual physical fabric of what we think of as "me." Monastics are made up of all those little potluck dishes you have offered to us. I find this a very beautiful and comforting thought.

In return, the monastic community endeavors to live life in a way that brings clarity of mind. Our intention is to live harmoniously and respectfully both within our community as well as within the greater world. We create and hold a space-a sacred space that encourages safety and freedom. Within this environment, the very best qualities of the human heart can be developed.

Not surprisingly, one of these qualities is that of generosity. The Buddha said, "If you knew the karmic results of giving, you wouldn't eat even one meal without sharing what you've got with somebody else." Ajahn Sumedho often adds: "Happiness is when you get what you want, but joy comes from giving." Perhaps this sounds like a line to get people to empty their pockets: "Giving is really good for you folks," as Jimmy Swaggert used to say. "The rattle of small change makes me nervous. Only folding money please."

And, of course, these kinds of teachings can be abused; however, the Buddha felt it was so important to establish "an economy of gifts" that he was prepared to be criticized on the one hand by the brahmins-who felt he had betrayed his class by forsaking his life as a noble prince and begging in the streets-and on the other hand by the samanas, the ascetic wanderers, who felt it was outrageous that the Buddha would sometimes accept offerings of fine food, expensive cloth, and grand dwelling places. The Buddha's reasoning on this latter point was that as long as an offering was not solicited and the nun or monk used it for supporting the practice of the holy life without attachment, it could be considered a pure offering.

Through practice, we can experience for ourselves that giving is so powerful because it is the most practical and direct method of counteracting selfishness. That which wants to hang on to something "for me" is a barricade blocking the door to liberation. "Me first" means "me last" to Nibbana. That which doesn't want to bother with other people and is concerned only with "my own" protection, "my own" comfort, "my own" preferences is the real problem.

In Asian countries, babies are taught when they are about six months old to put food into alms-bowls. The whole family applauds as the sticky rice drops from that little hand into the monk's bowl. The kid gets the idea early on: when stuff leaves your hand, you feel happy. It feels good to give.

But generosity is not just giving material things. It's giving one's time or attention. It's being in conversation and actually listening to what the other person is saying. How many of us can do that? That is a true form of giving. In giving our attention, we are giving our heart.

The Buddha talked about different ways of giving. There's what he might have called "cheapo" giving, which says, "I'm going to get rid of this anyway, so I might as well give it to you." Then there's the medium level of giving, which is sharing something that is valuable to you with others. However regal giving, or raja dana, is the most powerful form of giving. It is giving what is most precious to you. With all three forms, giving with an expectation of return is not giving at all. It's called cutting a deal. Deal-making does not bring particularly bright states of mind. It's more like a business transaction: "I'll stake this much and get back that much." Instead, giving should be done as the Christians recommend-without expecting anything in return. You are not giving in order to get; giving is a pure and unselfish act of kindness.

There is often a barrier to giving, though. When you think about giving away something that you like, questions come up: "Can I really afford this?" "Maybe I haven't got the time." We might have to exert some real effort to climb over these barriers of second thoughts, and this is not comfortable. There can be feelings of grief or pain when you give something to another person. But on the other side, there is a sigh of relief. Now we are in a space of freedom. When we make a gesture to go against self-centered habits, we feel delight.

The Buddha also made a clear reference to the fact that giving impersonally to the Sangha is of far greater karmic significance than giving to an individual, even if that person is a fully enlightened Buddha. In giving to an individual, we are still caught within the bounds of the idea of self. "This is me here giving to you there." That's the human tendency. Something in us wants to bond to a particular monk or teacher on a one-to-one basis. However, it's of far greater benefit to everyone to give from the heart whatever supports the Sangha and therefore all beings. By that very gesture, we have expanded our own heart beyond the personal, self-centered view.

It is in this way that the offering of the Kathina cloth-and all these other useful gifts for the monastery-is the most meritorious of all material offerings to the Sangha. The simple gesture of offering cloth is a way of manifesting the interdependence of our relationship. The monastics and the laypeople are a single, unified, whole community. What is given to us will be used and looked after. Your offerings will be helpful to the development of this monastery and to this way of life for years to come.

Adapted from a Dhamma talk given at Abhayagiri Monastery on the occasion of their first Kathina ceremony in October 1999. 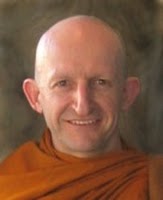 Ajahn Amaro (born 1956) is a Theravadin teacher and was until recently co-abbot of the Abhayagiri Buddhist Monastery in California's Redwood Valley. The center, in practice as much for ordinary people as for monastics, is inspired by the Thai Forest Tradition and the teachings of the late Ajahn Chah. Its chief priorities are the teaching of Buddhist ethics, together with traditional concentration and insight meditation techniques, as an effective way of dissolving stress. Ajahn Amaro has recently accepted the position of Abbot at the wests first Thai Forest centre, Amaravati in the UK.
See: www.amaravati.org
Posted by Dharma WIthout Borders at 12:24 AM